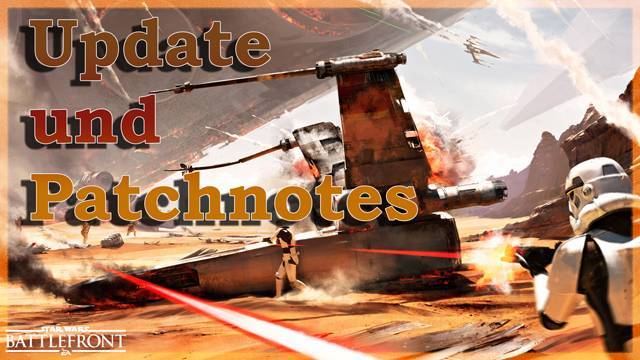 – Outer Rim: Now available for Season Pass owners
– New Feature: Hutt Contracts add a new way of obtaining Weapons and Star Cards
– New Feature: Spectator Mode introduces a way to watch Private Match games with a variety of camera angles and the ability to swap between players quickly
– Multiplayer Menu: Redesigned the screen to facilitate players being able to get into a game mode more quickly and easily
– Multiplayer: Teams will now re-balance when transitioning between maps
– Teamplay Focus: New feature in which an objective can be highlighted by each player to highlight where players are heading; press X (Xbox One), Square (PlayStation 4), or E (PC)
– Ranks: Increased Rank cap from 50 to 60
– Scoreboard: Added icons for playing as a Hero, playing in a vehicle, and player ping
– Scoreboard: Rearranged Score to be the first column represented
– Scoreboard: Faded player row to signify when a player has been defeated
– Combat: Added combat roll to non-Hero characters; strafe and double tap B (Xbox One) or Circle (PlayStation 4), for PC strafe and press Alt (can be rebound)
– Partner: The Partner Icon will now be visible on screen at all times
– UX: The currently selected Trait card is now shown in the deploy screen
– Credits: Updated Game Credits list

– New Weapons: The DL-18 and the DLT-19X can be obtained via Hutt Contrats
– New Powerup: The T-7 Ion Disruptor has been added to the powerup pool
– General: Triggering a card right before death will no longer result in an effect not triggering and the card going on cooldown
– Bodyguard: Corrected the Level 3 description from “Decreases explosive damage by a high amount AND blaster damage by a small amount” to “Decreases explosive damage by a medium amount AND blaster damage by a small amount”
– Survivalist: Corrected the Level 3 description from “Health regeneration starts much faster AND replenish a small amount of health with each kill” to “Health regeneration starts faster AND replenish a small amount of health with each kill”
– Bounty Hunter: Corrected the Level 3 description from “High chance to get a Power-up with each kill AND resets cooldown with each kill” to “Medium chance to get a Power-up with each kill AND current cooldowns decreases with each kill”
– Bounty Hunter: Modified drop chances and cooldowns – Level 1: 25% Drop chance, Level 2: 50% Drop chance, & Level 3: 50% Drop chance AND 75% cooldown on each kill
– Shields: Personal Shield, Squad Shield, & the Blaster Cannon will now deflect and absorb most forms of projectiles; exceptions being the Cycler Rifle, Scatter Gun & Proximity Bomb
– Shields: When Personal Shield is active, the player is unable to fire weapons and throw grenades, but can still deploy droids, turrets, & call in Heroes and vehicles
– Bowcaster: Updated damage to be consistent across all 3 charge levels – Projectile damage is now 40, Explosion damage is now 33, & the Explosion radius is now 2m
– Bowcaster: Lowered max hold time from 5 to 3s
– Bowcaster: Now properly goes on cooldown when firing a shot and then quickly entering a turret
– Barrage: Lowered fuse timer from 2-2.25 to 1-1.5s
– Barrage: Decreased inner explosion radius from 3 to 2m
– Impact Grenade: Increased damage from 90 to 100
– Impact Grenade: Decreased explosion radius from 2.25 to 2m
– Ion Grenade: No longer deals collision damage
– Flashbang Grenade: Added a screenshot component to give it an extra disorienting effect
– Scan Pulse: Cooldown time increased from 10 to 18s (normal) and 8 to 16s (upgraded)
– DL-44: Damage decreased from 19 to 13 at a ranges greater than 40m
– Powerups: Deployed Droids and Turrets will now self-destruct after 20s when the owner is defeated
– Blaster Cannon: Kills will now count towards leveling Trait Cards
– Blaster Cannon: No longer takes splash damage from its own shots
– E-Web: Players now correctly take damage when right up against the barrel of the gun
– Viper Probe & R5-D4 Droid: Spawn protection decreased from 2 to 0.5s
– R5-D4: Now shows the correct health bar color for both teams
– Smart Rocket: No longer fires from the center of the player camera, now from the barrel of the weapon
– Vehicle Turret: Destroying this will now properly grant you score
– Jump Pack: Cooldown lowered from 25 to 22 (normal) and from 20 to 17 (upgraded)

– T-47 Airspeeder: Now properly explodes when hitting the ground after a player ejects
– T-47 Airspeeder: During Walker Assault it is no longer possible to switch Tow Cable targets during the Tow Cable event
– Speeder Bike: Kills with the cannon are now properly displayed
– Speeder Bike: No longer takes damage when just outside the edge of the Orbital Strike boundary
– AT-ST: No longer takes damage from fire
– AT-ST: Changed the max pitch on the grenade launcher
– Millennium Falcon & Slave I: Now are immediately destroyed when crashing into the ground while in 1st Person view
– DF-9: Laser fire is now visible when angling the turret up
– Y-Wing: Players are now properly notified if they are killed by a Y-Wing

– General: Misc spawning improvements across various map & mode combinations
– General: Princess Leia’s Honor Guard and Emperor Palpatine’s Shocktroopers are limited to only 2 -spawns during the Heroes vs. Villains and Extraction Game Modes
– General: Players no longer instantly die during vehicle deployment after having taken damage that would kill them prior to the transition
– Fighter Squadron: Games will no longer end in a draw when a player that crashes into the ground would have awarded the winning points
– Fighter Squadron: Vehicles of equal size will now both be destroyed when colliding regardless if one vehicle is shielded
– Hero Hunt: Redesigned the way in which the new Hero is selected, now the top 3 damage dealers have a chance to be the next Hero – Spin the Wheel!
– Blast: Re-added Sulphur Fields back into the Blast map rotation
– Drop Zone: Altered player count from 16 to 12